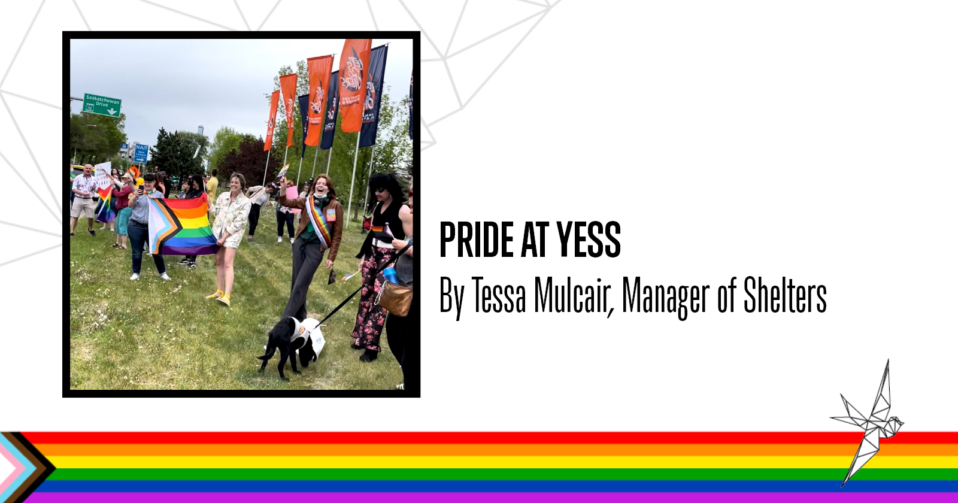 by Tessa Mulcair, Manager of Shelters

This month we held a youth Pride event with some of our community partners. We won’t lie, we’ve been missing the Pride parade around here. The majority of our youth are 2SLGBTQ+ and many have faced isolation and rejection from their families for it. The Pride parade was a time where we could not only celebrate our youth, but also surround them with thousands of people flying rainbows and letting them physically see that they belong in the community.

While there was no parade this year, there was a block-style festival held at Grindstone Theater. These types of events, though they are inclusive and accessible in nature, can be intimidating for people who are not quite sure where they belong in society. When you hear “You’re not a paying customer, go away” the other 364 days a year, it can be hard to suddenly trust that if you sit down to watch a free drag show or concert you won’t be shooed away. So, we created an event just for marginalized youth to kick off the festival and set them up to know that they belong at Pride too.

Together with CHEW, OSYS, and iHuman we created a space where youth could get their rainbow on – literally, with a Pride swag station. They could get decked out in free rainbow gear and glitter, or simply grab a flag, either way the goal was to make sure they would fit right in at the festival. We had Fox Burger swing by with their food truck and generously provide an amazing meal, so they would not feel left out if they could not afford the festival food options. Kind Ice Cream provided us with their rainbow “Gay OK” ice cream, of course it was a big hit too. Youth could create their own patches and buttons on the spot so that they could reflect their identity exactly how they wanted to. We had a selfie station where they could get an instant-print picture with friends or our fabulous guest drag queen, Karmic the Kween. We also had guest appearances by local queer icons MLA Janis Irwin and MP Randy Boissonnault. And finally, we held a “reverse parade”, making signs and waving our flags on Gateway Blvd to celebrate with those driving by our little event, pulling in a hint of that community support we know is so strong.

We’d like to give a huge thank you to all those that worked to pull this event together, our youth felt the love and support.


Thank you for the continued support from our frien

Youth that access YESS are part of countless broad

The primary goal of the art program is to be youth

Huge congratulations to the ATCO EPIC team for th

Art is a tool for building connections. Engaging i

Thank you to the American Eagle staff at the Outle

Anger and sadness can get a bad reputation but the

Thank you to @intactinsurance for choosing us to

We wanted to thank Spirit of Hope United Church fo

Your ticket for the: YESS Celebrates Pride Month!