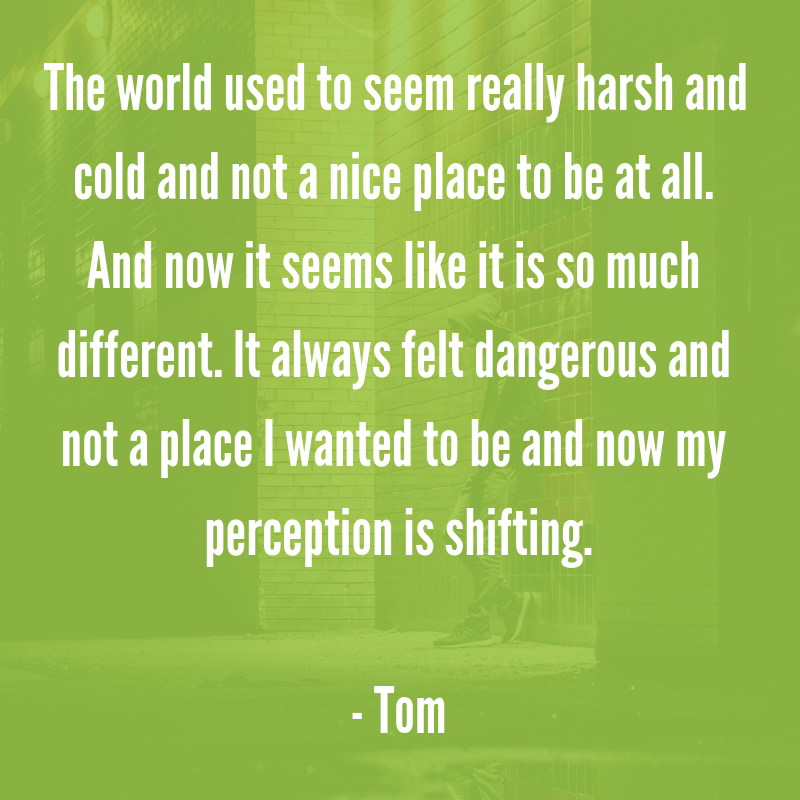 My name is Tom and I am 21 years old. My girlfriend’s mother took me to the YESS Shelter about three years ago. I was in a real emotional state and I was new to homelessness. I accessed the Shelter and the Armoury Resource Centre for a decent amount of time. I would be dead if it wasn’t for YESS. This is so serious, and it is not a joke. I want to say thank you to anyone that plays any sort of role at this organization. I know that sounds vague but it is true. YESS helped me realize that I wasn’t just born to be a homeless person. That has been the hardest thing for me to do, is to change that mindset. When you are homeless it feels like you are worthless. Every day I am working to get rid of those feelings. The staff at YESS, they care. When you are homeless it feels like no one else in society cares and getting over those feelings is still a struggle. So yeah, the staff at YESS, they help save people.

My greatest accomplishment has been getting clean. I have had 4 overdoses and honestly, I just happened to get found. For some people they don’t get found and they die. I saw these things happening to the people around me and to myself. I watched my girlfriend basically die and then get revived. The effects of drug addiction are all the same and it is all terrible and it doesn’t matter what drugs they are. People need to know how serious that is.

For my future, I see general happiness, which is really nice. Five years ago it would have been impossible for me to say that. I have been with my girlfriend now for 3.5 years and the only condition for our relationship is that we are both clean. As long as I am not on drugs, I am happy. And I am doing that now. I will also always be thankful to my girlfriend’s parents. They did everything they could to help get me sober and they did all the hard stuff, the stuff that made me hate them, but they stuck by me, and us.

The daily connection to resources at YESS helped me prove to people that I was working on things. The bus passes that they provided helped me so much. Honestly, the ability to move around the city was a huge deal for me and helped me significantly. Having somewhere to go during the day kept me out of a lot of stuff. And having that is what helped me get to where I am today. When you are living in your addiction the only things on your mind or taking up your time are dealing drugs, buying drugs, dealing with gangs, and you become like an animal and like all those drug instincts they take over. So when you do have those brief moments where you think you want to get out of it, then being at YESS gives you the support to work on those options.

The world used to seem really harsh and cold and not a nice place to be at all. And now it seems like it is so much different. It always felt dangerous and not a place I wanted to be and now my perception is shifting.

I started working at a salon as a barber about two months ago. It gives me a sense of purpose and validates my creativity. It gives me an outlet. I’m so thankful I am working. I would really like to go back to school to become a hairdresser now that I know what all of this feels like.

If I could give advice to someone who is dealing with addiction and homelessness I would say don’t even think about it just go to detox. There is never a perfect time so just go do it. I went 11 times and you just have to keep trying until it clicks for you. It is like anything: you repeat things until you learn it. You keep trying until you learn how to live your life without drugs. And eat something! It plays such a big role in how you feel. You have to eat. You need nutrition. Take advantage of shelters and the food they have to offer.

I would say to people that don’t know anything about homelessness, that everyone’s situation is different. I hope that people will not be so judgmental of homeless youth. Don’t put us down. We are trying so hard just to be alive every day.

Our mission at You

About Our NEXUS 24/7 Shelter

Did you know fear of lack of oxygen is a secondary

Thank you to @birdconstructioninc they did a pheno

Did you know you can donate monthly to YESS? For n

Thank you to Alberta Milk for sponsoring YESS! En

We are half way through

Thank you to @darcymeats Market for giving back to

Everyone deserves a little R&R in the mountains an

Want to support all that YESS does? Join in on our

Enter into our @knordicspa Raffle to indulge in so

There are so many reasons to support the youth at

Your ticket for the: Meet Our Youth: Tom’s Story