An Adventure in Champion City | YESS Gala for Youth 2016 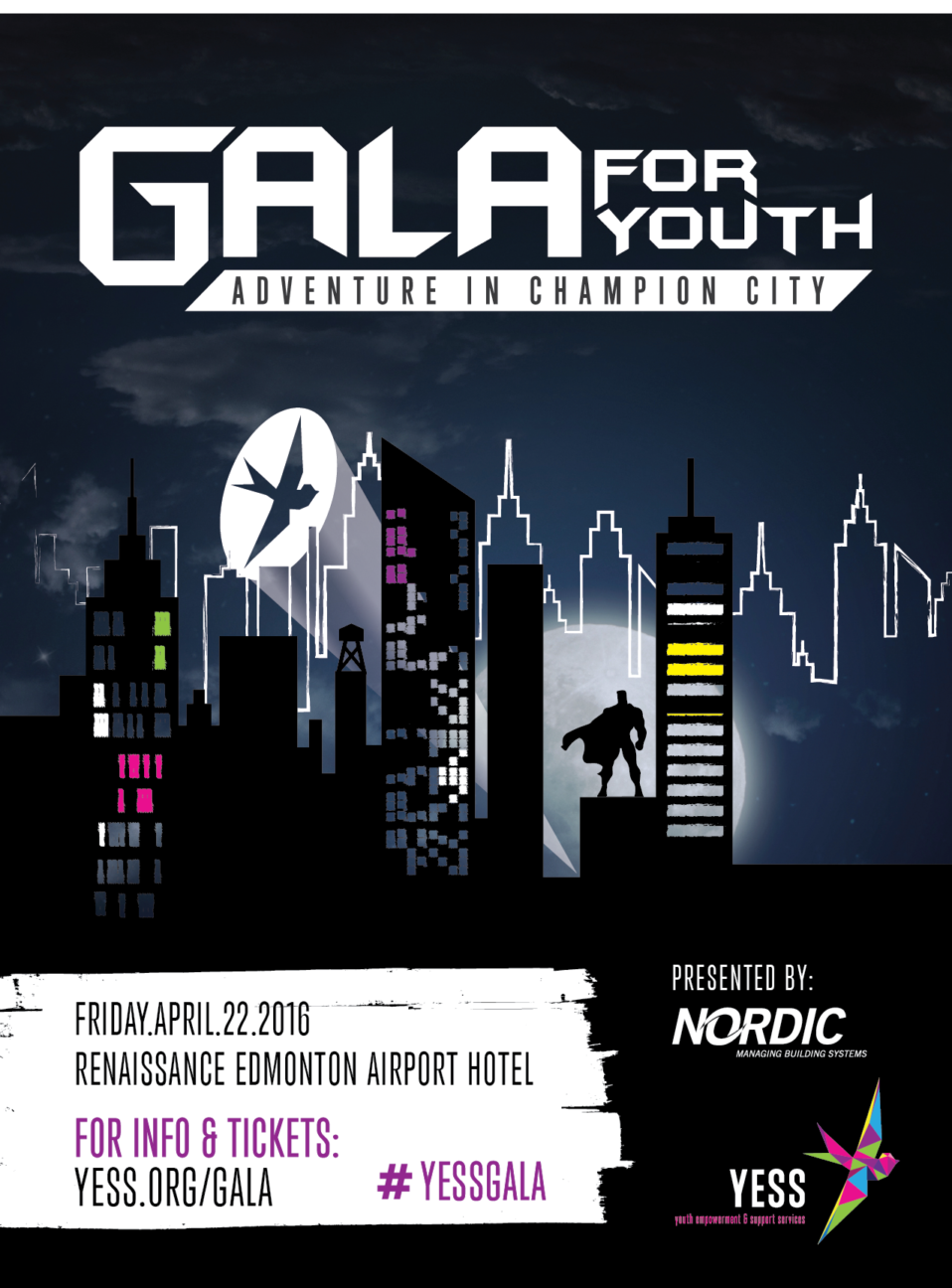 On April 22, guests of the YESS Gala for Youth entered the moody metropolis of Champion City, a place of back-alley villainy and high-flying heroics. Who would win the night in the battle between good and evil?

Guests arrived at the Renaissance Hotel and wove through the dark alleyways of Champion City to reach the super-secret soiree in the shadows. The Champion City alleys were the perfect place to mingle with Batman, Superman, and Wonderwoman on the lookout for trouble. Prowling through the crowd were Catwoman and the Joker.

The elegance of themed cocktails and hors d’oeuvres contrasted with shady back alley dealings. The finest counterfeit Champion City Jewellery was on offer, and metropolis’ best libations were stashed in Lex Luthor’s Liquor Cabinet, sponsored by The Sherlock Holmes Hospitality Group. The Riddler offered the chance to beat him at his own game at the Riddle Wall, with prizes from Simons. Guests could also step right onto the cover of their own comic book at the photobooth provided by One Step Beyond Photography.

At dinner, guests finally met their mysterious host: Lex Luthor himself, who claimed to be on the path to redemption and seeking a new place in society as a philanthropist. The Champion City skyline surrounded the ballroom, lit with spotlights of our sponsors’ own heroic logos in a presentation by Owen Brierley and Edmonton Digital Arts College. Tables were set in graphic black and white with the pop of colour of superhero-themed centrepieces, sponsored by Interpipeline.

René Cloutier of Nordic Mechanical Services, Presenting Sponsor of the YESS Gala for Youth, greeted and thankedguests on behalf of YESS. The Honourable Amarjeet Sohi brought greetings from the Prime Minister and offered powerful words on the unified effort required to end youth homelessness. The dynamic duo of Mayor Don Iveson and Honourary YESS Patron Sarah Chan praised the community of YESS supporters in Edmonton.

Deb Cautley, Executive Director of YESS, brought not a speech, but a story. The story of a boy who had been abused by his parents for fifteen years and finally thrown out of his home. He slept outside in a park near the house for five nights, then another two nights at the fence by the backyard. Finally he was allowed back in the house, only to be given a slip of paper with the address to youth shelter. For two months, YESS was this boy’s home. During the day he attended his first year of high school, and in the evening YESS staff helped him study and offered him support and counselling. It was the first time he felt like part of a family, the first time he had felt loved in years.

The boy of this story then took the stage: Jay Ball, General Manager of FC Edmonton. Jay offered words of encouragement to the youth of YESS and praised their resiliency and the strength each carried with them—strength that could grow with YESS’ help.

“There is much more to my story,” Jay said. “But I attribute my success as a human being to YESS. Walking through that door saved my life and gave me hope. It changed my story. Change your story and it can change your life.”

The ballroom erupted in applause for Jay’s bravery, wisdom, and strength. We are so grateful to have former YESS youth share their stories of hope and resiliency. Thank you so much, Jay, for sharing youth powerful words with our guests.

Even with Batman, Superman, and Wonderwoman in attendance, our guests proved themselves to be the true heroes of the YESS Gala for Youth, raising over $60,000 during dinner to provide basic needs to youth who are experiencing homelessness and need it most. Over 60,000 meals are served in the Nexus shelter every year, and the amazing support of our guests will go a long way in making sure our youth can always find what they need at YESS.

The evening rolled on to the exciting live auction, emceed by the one and only Danny Hooper. Bidding took off faster than a speeding bullet on fantastic items like a trip for two to anywhere WestJet flies with all the EIA perks, paired with a condo rental at Big White Ski Resort (donated by René Cloutier, WestJet, and Edmonton International Airport), a trip for two to Yellowknife including flights, accommodation, and a golf package (donated by Canadian North, The Explorer Hotel, and the Yellowknife Golf Club), a barbecue dinner for 24 at the Sawmill Restaurant Group (donated by Tom Goodchild), and a masterpiece by Giselle Denis painted live at the gala!

But the excitement wasn’t over yet. Lex Luthor took to the stage to reveal his whole bad guy-turned-philanthropist act to be a hoax! His fiendish ways still very much intact, Lex summoned his henchmen, the Joker and Catwoman, to rob the guests of their Champion City jewels. The villains ran rampant and Lex relished his victory—until Batman, Superman, and Wonderwoman swooped in to save the day! They apprehended the villains and march them out of the ballroom to cheers from the crowd.

With our guests and their Champion City jewels safe and sound, Crystal Pearce from Hillberg and Berkmade a draw for much finer fare than back-alley baubles: jewellery sets from the collection at Hillberg and Berk.

The evening drew to a triumphant close with the sweet taste of dessert—white chocolate cranberry tart, avocado ice cream, and macaron with dark chocolate ganache, made possible by Dentons—and the rocking sound of Samantha King and The Retrofitz.

We would like to thank the superheroes of the YESS Gala for Youth: our sponsors, guests, donors, volunteers, and staff, for bringing this Adventure in Champion City to life. You helped us raise over $218,000, which will empower our youth on their journeys to brighter futures.

To see all the photos that were captured in Champion city, click here, or visit www.onestepbeyond.ca!

Thanks to all of our sponsors this year, including:

Your ticket for the: An Adventure in Champion City | YESS Gala for Youth 2016

An Adventure in Champion City | YESS Gala for Youth 2016